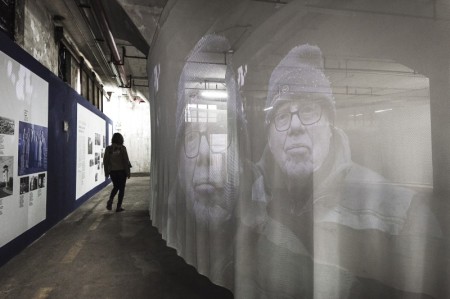 New Horizon_architecture from Ireland is the flagship exhibition programme for Irish architecture and the built environment as part of Irish Design 2015 (ID2015), a year-long initiative backed by the Irish government exploring, promoting and celebrating Irish design throughout Ireland and internationally.

New Horizon_architecture from Ireland has opened at the Dacheng Flour Factory, Shekou, Shenzhen, China, following London and Chicago. A fascinating audio-visual installation of photography and film following the connection between Shannon and its historical influence on shaping the Chinese city of Shenzhen.

Selected by curators Nathalie Weadick of the Irish Architecture Foundation, and Raymund Ryan of the Heinz Architectural Center at Pittsburgh’s Carnegie Museum of Art, New Horizon_architecture from Ireland presented the work of two practices in the Ireland Pavilion in Shenzhen: AP+E (Jeffrey Bolhuis and Laurence Lord) and Urban Agency (Andrew Griffin,Maxime Laroussi, Henning Stuben, Heechan Park). Working with Irish photographer and filmmaker Matthew Thompson and Areaman Productions, they have created a sensory environment of concentric curtains within which two short films exhibit parallels in the daily life of both Shannon and Shenzhen today.

After WWII, the rural town of Shannon on the west coast of Ireland became established as a transatlantic refuelling point, and in 1959 was developed as the world’s first Free Trade Zone and New Town. Through tax incentives, multinationals from the US were attracted to set up their European headquarters there, providing a new type of business model. On the other side of the globe, China was starting to develop its urbanisation policy and was interested in how Shannon had successfully decentralised its administration. After many visits in the early 1980s by Chinese leaders to study this model, under the direction of Deng Xiaoping, the Shannon planning system was used as a template in the formation of Shenzhen, and since rolled out in many Chinese cities.

The idea that the fundamental principles behind Shenzhen were originally modelled on a small Irish town and the spectacular jump in scale that the concept has undergone since, is the starting point of the Ireland Pavilion. The historical connection between both cities is told through archive photographs while the current connection between both places is investigated through the medium of two short documentary films.

AP+E and Urban Agency have interpreted the Biennale’s theme, Re-Living The City, to compare and contrast everyday life in two communities half-a-world apart, foregrounding the legacy, need and potential for urban design and planning to better the daily lives of citizens of all nations. Allocated a privileged position at the Dacheng Flour Factory, the two practices chose to create an installation to record the ongoing ties between Shannon and Shenzhen.

AP+E and Urban Agency are both international practices with Irish partners and Irish projects. As part of the 2013 UABB, AP+E (Architecture Practice + Experimentation) exhibited Public Rules, an investigation into alternative urbanism, at Hong Kong’s Kwun Tong Ferry Pier. A year later, Urban Agency placed second in the competition to design a major mixed-use development at Qianhai, the westernmost zone of Shenzhen, adjacent to the famed Pearl River.

Image above by Matthew Thompson